The modular and low density character of the mat building typology in which the project is based gives as a result a large number of façades, but of similar characteristics. Due to this premise, it was chosen an unitized panel system of double height that respond to the big and regular dimensions of the building, with the aim of systematizing its construction. In addition, the metallic structure of the panels as well as the industrial finishing of the elements used in their configuration (aluminum mesh as solar protection, exposed sandwich panels...) relates the final image of the project to the history of the area where it stands (next to Barcelona's Poblenou's Cemetery), a neighborhood  occupied by factories in the past.The unitized system provides a common frame where different variations can be applied to respond to the different demands of the façades (orientation, space, privacy...) without losing the unified image given by the common frame.The usual profiles that support the unitized panels are redesigned to be placed in the external part of the façade (solving the subsequent difficulties to guarantee the thermal isolation continuity as well as the water tightness) as an expression in the image of the project of the building structure inside. That structure is designed as a succession of slender metallic elements with short spans that fit with the façade panels rhythm, characterizing the interior spaces image where exposed structure and the façade panel system are understood as a single entity. 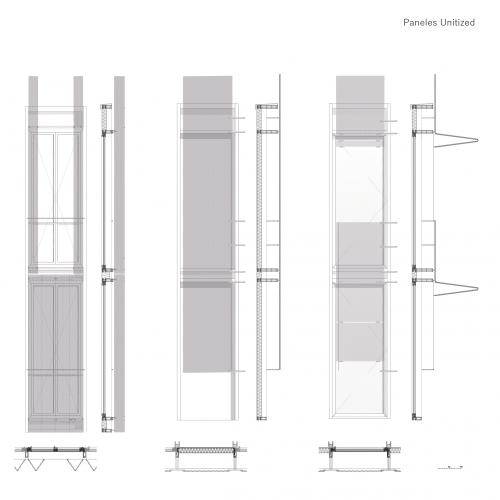