Support element formed by a two-dimensional component that, after fitting, closes the facade and defines its outer image. Depending on the degree of complexity of the panel, especially with regard to the design of the joints and the sealing mechanisms, these are of the following types:

- Panels that need additional layers on the inside. They are usually associated with a single material and technique and, in general, need in situ joints sealing (concrete or GRC - glass fiber reinforced concrete panels-).

- Panels that are brought to the site with all their layers and thusly all their functions. In most of the cases the joints are accurately pre designed and prepared so as to avoid in situ sealings. These include a variety of subtypes according to the technology used (Unitised panels are the most common)

Panels formed by pouring or gunnitating an amorphous cement paste over a mold. This paste can be either a concrete or a mortar. In the case of GRC -fiber reinforced mortar-, it is usual to use a steel frame so as to give enough mechanical capacity to the thin GRC shell.

Panels made in the workshop by the assembly of various semi-finished products and brought to the site with mechanized joints, including sealing gaskets. Normally they incorporate everything that the façade needs to complete its design: sunscreen, balusters, etc. 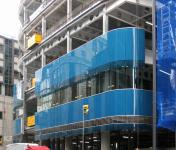 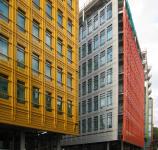 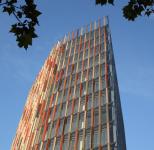